Welcome to Wine Blogging Wednesday, the online tasting event dreamed up by Lenn Thompson of LennDevours. Today, our host is Richard the Passionate Foodie and his theme honors the ancient god of Sake.

I know almost nothing about Sake. I know it's made from rice. That's about it. And given my remote location in the summer, I was a bit worried about finding a bottle of the stuff to taste. But even my centrally-isolated coastal market had a small selection of sake, hiding underneath the cooking Sherry. Most of it was either worryingly expensive (more than $25) or worryingly inexpensive (under $5). One option was cloudy and had "rice bits" in it, and that seemed too advanced for this palate. So I picked a small-format bottle that cost just about $17. 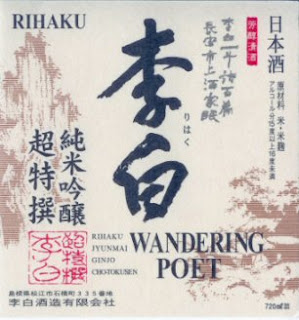 Richard has a great rundown of Sake styles on his blog, and from his list I learned that the Sake I selected--the NV Rihaku Wandering Poet--falls into the Junmai Ginjo category. That means the wine should be full-bodied, with good acidity, and be fragrant and complex. Richard likes Junmai Ginjo as his "everyday" Sake.

I found the wine to be somewhat difficult to describe in terms of aromas and taste. It was like nothing I've smelled before--slightly glycerine, slightly yeasty, slightly reminiscent of beer. There was a clean, yeasty taste on the tongue, with a relatively full-bodied feel in the mouth. More yeasty, glycerine notes appeared in the flavors.

I liked the Sake, but at $16.99 for 375ml it's probably not something I'd rush out and buy again, and I would say it represents good QPR. However, I am intrigued and want to learn more. So this has been a great experience, because it's going to widen my wine horizons.

Thanks to Richard for a great theme, and I look forward to reading the other posts and learning more about Sake.
Posted by Dr. Debs at 7:42 AM

Thanks for participating in WBW#59, and I am glad to see you want to learn more about Sake.

I do like that there are a number of half-bottles of Sake available. It makes it more affordable to take a chance on a bottle.

I have had the Rihaku before, and liked it, though I was not impressed with it.

I you go to San Francisco sometime, check out the True Sake store, which only carries Sake.

I'm interested to participate in upcoming Wine Blogging Wednesday. Could you share with me how I can do this and is there somewhere to subscribe to get notifications?

I have a fairly new wine blog and would like to communicate and join others for this frequent group tasting/postings.