The summer puts me within arms' reach of my wine cellar--a long windowseat in a house in the woods that that never goes above 60 degrees. (you can see the tell-all pictures here) Every wine bottle I unearth has some history attached to it--where I bought it, when, why--and it feels like greeting an old friend to see them again.

While puttering in the windowseat I found two bottles of Cabernet Sauvignon-based wines from the 2003 vintage that had entered my cellar the same month--December 2006. One was from France's Haut-Médoc region in the Bordeaux. The other was from California's Alexander Valley. I decided to grill some steaks and open both bottles to compare their taste and their readiness for drinking. I like experimenting with cellaring wines, and usually find that my patience is rewarded.

The first wine, the 2003 Château Cantemerle, cost me $20.99 from K & L Wines. I purchased several bottles in April 2006 as Bordeaux futures. They arrived in December 2006 and were promptly stored in my windowseat cellar. Even six years after harvest and with two and a half years of cellaring I think it might have been a bit early to open up this wine, which is made from a blend of Cabernet Sauvignon and Merlot. When I pulled the cork, there were aromas of earthy funk and leather. Over the course of the evening, plum and cassis aromas and flavors were added to the earthiness, along with some herbal notes. What I most liked about this wine was its silky texture, and the way the wine tasted like a cross between a Burgundy and Bordeaux. The wine was still awkward, though, a little like a gawky adolescent. Nevertheless, I think it represented very good QPR for Bordeaux, and will be interested to see how the other bottles develop over the next 2-4 years.

I purchased the second wine, the 2003 Chateau Souverain 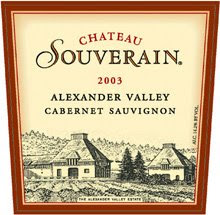 Cabernet Sauvignon, in December 2006 at Costco. The price was $14.99, and it's been waiting in my cellar ever since. I expected this bottle to be a bit more integrated and really hitting its stride--and it was. Alexander Valley Cabernets are (in my opinion) a bit "old world" in style, so I was ready for the initially strong aromas of cassis and bell pepper that I associate with red wines from this part of California. As time passed, however, there were more plummy and cassis aromas and flavors, accompanied by some toasty oak, and the vegetal notes faded. I liked this wine's lushness, and its cinnamon-inflected finish. All in all, I thought it was excellent QPR for the price paid and was glad that I'd let the wine sit as long as it did before opening it up. Right now the wine's compexity is evident. If you have any of this wine in your cellar, I suggest opening it up now or over the next two years.

If you've got some 2003 Cabernets in your cellar, are you drinking them yet? And if so, what are your experiences?
Posted by Dr. Debs at 8:44 AM