It's Wine Blogging Wednesday again, the online monthly tasting event originally conceived by Lenn Thompson of Lenndevours. This month the theme was set by Remy Charest of The Wine Case blog. His instructions were for us to pit the north against the south--but after that he was pretty flexible. You could compare wines from different countries, different regions, or even different parts of the same appellation. 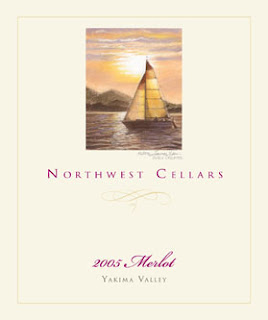 The 2005 Northwest Cellars Merlot was an excellent QPR bottling blended from 75% Merlot, 13% Syrah, and 12% Cabernet Sauvignon. (suggested retail, $15) Slow to open, the wine developed to reveal plum and cassis aromas with a bright raspberry note. The flavors underwent a metamorphosis from a simple taste of fresh plums to something darker and more complex, with plums, graphite, and smoke. There was some green stemminess as well--which I always like in Merlot--and the rich aftertaste was luscious with milk chocolate notes. This was an uneniably complex and elegant wine, and would be enough to convince any Merlot skeptic still having horrible flashbacks from the 90s that the grape is worth a second try. 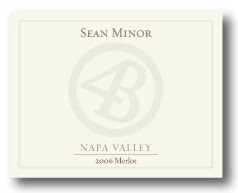 For my "south" bottle I opened up the 2006 Sean Minor 4 Bears Merlot from the Napa Valley. (suggested retail $17; available for $10-$18) This very good QPR Merlot opened at first to rich, slightly confected cherry-berry aromas with a hint of green pepper in the undertow. Plum and cherry fruit blended with herbal notes in the flavors, and this rich profile was accentuated with cedar and allspice. The aftertaste was chalky and slightly drying, but this smoothed out with time and air. The wine continued to deepen and gain weight and complexity over the two days that I sipped it.

I think that both of these wines will be even better in 6-12 months than they are now, which makes them good candidates for short-term cellaring. Merlot is a versatile grape food-wise, and will bear as well with summer barbecue and burgers as it will with next autumn's pot roasts, so if you like Merlot I'd stock up on these beauties now.

Drinking one variety from two distinct locations was a great learning experience for me. Going in to it, I would have expected more chocolatey richness from the Napa Wine, and more herbal notes in the Washington wine. My tasting showed just the reverse. Both of these wines were keepers, though, in my book.

Thanks to Remy for a great theme, and I'll see you back here for WBW #56 next month.

Full disclosure: I received both of this wines as samples.
Posted by Dr. Debs at 5:30 AM

Interesting that your north and south comparison was opposite of what you expected! Based on your tasting notes, I'm going to seek out the Northwest Cellars! Was the Sean Minor a blended Merlot also?