Feeling the Heat? Cool Off in the Italian Alps 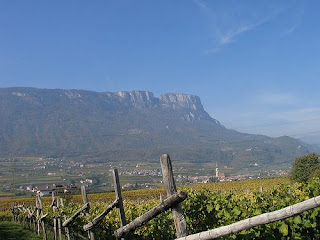 Last month was a bit of a whirlwind in terms of work, and I never got myself organized for the next stop in my tour of Italian wine regions. This month I'm back on track, and pointed in the direction of Trentino-Alto Adige. (photo by bobferdon)

Tucked up against Austria, this wine region is known for its snowy ski resorts, craggy peaks, and its belief that bread and wine is the stuff of life. One of the region's proverbs is Pane e vino fanno un bel bambino or "bread and wine make a beautiful baby." The area's dedication to wine is all the more remarkable given the fact that only 15 % of the land is arable, and vineyards often are planted in terraced vineyards on mountain slopes. 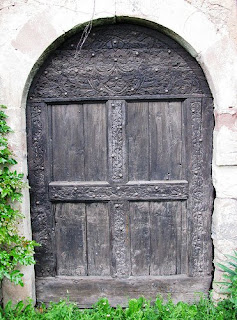 Viticulturally, Trentino-Alto Adige has been influenced by Austrian, French, and German traditions as well as Italian. The region's winemakers make racy whites from varieties like Pinot Bianco, Riesling, Traminer, Sylvaner, and Gruner Veltliner, for example. And if you're looking for a red from Trentino-Alto Adige, expect to see bottlings of Cabernet Franc, Cabernet Sauvignon, and Merlot as well as Sangiovese and Schiava. (photo by John Shave)

As the wine goes, so goes the food. In the northern part of the region (Alto Adige) the food has a Germanic flavor and the people are predominantly German speaking--so lots of sausage, cabbage, and dumplings are eaten with hearty reds and acidic whites. In the south, around the city of Trent where Italian is the most common language, polenta and pasta are popular foods, often served with mushrooms.

Have you had many wines from Trentino-Alto Adige? If so, what are your recommendations? Check back here for mine over the next few weeks.
Posted by Dr. Debs at 5:30 AM

I spent nearly 2 weeks in Trento/Bolbeno, both living with a family and hiking in the Dolomites...when I was 15 years old. I don't believe I had a drop of wine; and if I did, I surely didn't appreciate it properly. Argh!

What I would give to go back and repeat much of travels of my youth, now that I have an interest and knowledge of wine. I'll take your advice for this summer, though, and do a little armchair travel to this region.

I recommend the wines of st. michael-eppan (which is between bolzano/bozen and kaltern/caldaro. Try the st. valentin sauvignon and the st. valentin pinot noir. The monastery of Muri Gries (Bolzano) and produces a red wine made of the Lagrein Grape which is highy enjoyable.