Airline Wine in the Friendly Skies 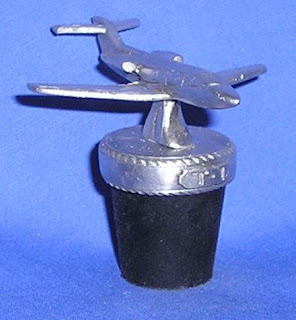 Recently, over on Winecast, Tim Elliott began a very interesting discussion of airplane wine. In it, he wondered why it is so awful, and why someone like Cameron Hughes doesn't jump on the opportunity to get some of his wine into more airplane galleys. (wine stopper with plane by Herogear)

I just flew a transatlantic United Airlines flight, and this topic was much on my mind--especially as I'd been upgraded to business class in exchange for a zillion miles. As always, I sit in international business and wonder how I will ever survive my next coach journey because it really is SO much better. And yes, the wine is better too. Is if $4000 better, however? I don't think so.

When I got handed the menu, the first thing I looked at was the extensive wine selection picked for United by Doug Frost. Who is Doug Frost? One of the few to hold both a Master of Wine and a Master Sommelier distinction, it turns out. And his picks were really not bad, and they went well with the food. What was terrible was the temperature at which the wines were served (whites way too warm, and reds even warmer) and the itty bitty shot glasses on stems that passed as wine glasses. I had First Class in my sights, and can report that they got better glasses--but not much better.

And the wines in First Class didn't actually look better, either. They were getting Kim Crawford Sauvignon Blanc--we were getting a choice between the 2005 St. Supery Sauvignon Blanc and the 2005 Karst Kallstadter Kobnert Riesling Kabinett Trocken (I picked the second and had it been a tad cooler it would have been a very refreshing choice to accompany the curried chicken and rice that I had for dinner). I honestly couldn't read the red wine labels in First Class, but one looked like a Bordeaux and the other like a California red. Back in Biz, we had a choice between the 2005 Delas Freres Cotes du Rhone Saint-Esprit (which was really very good) and the 2004 Trapiche Oak Cask Cabernet Sauvignon. And they served NV Drappier Carte d'Or Brut Champagne and Sandeman Founders Reserve Port, too.

I returned in steerage--um, coach--rather than business class, and the wine was absolutely positively undrinkable. It was also unrecognizable. I'd never heard of any of them before, and as you know I do drink wine fairly regularly! My advice is stick to water if you're flying economy. It's better for you anyway. And if you're in business, remember that the wine they're serving you costs around $10 a bottle--nice, but not $4000 nice. Save your money and spend the $4000 on a nice wine refrigerator and $1000 worth of wine to put in it.
Posted by Dr. Debs at 8:24 PM

Email ThisBlogThis!Share to TwitterShare to FacebookShare to Pinterest
Labels: travel

I recently read (here) that a lot of wine is now being sold past the security checkpoints. Couldn't one BYO wine and plastic glass on board?

I'm not sure that's legal, anonymous. Usually things you buy in duty free shops need to remain sealed until you reach your destination. Of course, you can usually drink before you get on board, but then you run the risk of being everyone's least favorite passenger! I think Tim's got the right idea: Cameron Hughes, we need you.

I get upgraded on occasion, and I blogged about it here. Nice topic! Check Catavino - I think they had something on a formal tasting at 30,000 feet.