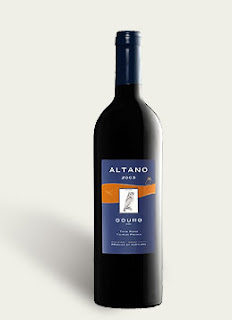 Portugal is home to numerous grape varieties that are relatively unknown in the US. One such grape--Touriga Franca--is used in the blend that makes up Port. But it also goes into Portuguese table wines, where it imparts rich flavors and aromas. With Portuguese wines in general rare finds on wine shop shelves, I was thrilled to find an example of Touriga Franca in a local store for under $10 and check off another box on my Wine Century Club worksheet.

The 2004 Symington Altano is made from a blend of Tinta Roriz--the Portuguese name for Tempranillo--and Touriga Franca grapes. ($6.95, Chronicle Wine Cellar; available from other merchants for between $7 and $9) The wine was dark, dark ruby in color--a characteristic of the variety. There were heady aromas of plum, flowers, blackberry, and chocolate. Flavors of black raspberries and sour cherries picked up a deeper, earthy note as it moved across your tongue. There flavors dissipated quickly after the wine was swallowed, and the aftertaste was predominantly of earth. Good QPR.

Where this wine shone was with food, which helped to keep the earthiness of the wine in balance. It was especially good with pork in tangy BBQ sauce, since the sourness of the cherry paired nicely with the sweet, tangy sauce.
Posted by Dr. Debs at 7:30 AM

Seek out a single varietal of the Touriga Franca for a very unique wine - lot's of cherry and raspberry, really bright color, just a lot of fun. If you can find it, the small producer Encostas de Estremoz makes a bunch of single varietals that really let the fruit shine (including a very interesting Alacante Bouschet!).

Symington also produces another Douro, Vale do Bonfim Reserva for about $13. Great QPR

Thanks for the advice, Michael. I liked this wine so much that I would love to try a single-variety wine made with just Touriga Franca. And Marco, I will put the other Symington on my shopping list. This was the first time I've seen one of their wines, but now I know what I'm lookin for--and of course the Portuguese wine selections in most LA stores are woefully small.