An Offer You Can't Refuse: Sicily in February 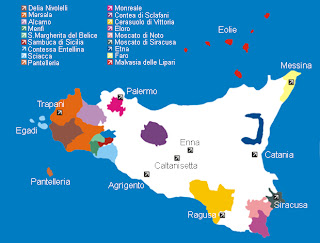 It's February, which must mean that it's time to switch Italian wine regions. Last month we focused on Friuli, and this month we are sweeping southwest to the island off the toe of the Italy's boot: Sicily. Sicily is an ancient kingdom that stood at the crossroads of many cultural influences, including Greek, Roman, Norman, Arabic, German, and French in addition to those of its native Sicilian population. As you might imagine, all of those cultural influences left their own stamp on the region's wine, and today Sicily has a thriving viticultural scene as the map to the left shows. (map from Discover Sicily)

I'll be tasting a white, a red, and a dessert wine from Sicily, and sharing my observations about the region's wine with you as I go. I've been reading in the Wine Book Club's first selection, Vino Italiano!, and one of the things I'm continually struck by is how wine and food are an integral part of a region's culture. So, beginning this month I'm going to share some resources that will help you to immerse yourself not just in a region's wine, but in region's culture, too. So here are some of my recommendations for movies to watch, food to eat, and music to listen to while you're sipping some wine from this historic wine region.

For More About Sicilian Wine: web resources include the Wines of Sicily and Wine Country Italy's Sicily page.

Movies to Watch While Drinking Sicilian Wine: Moonstruck, The Godfather (take your pick of which one), Cinema Paradiso, Il Gattopardo, Il Postino

Food to Eat While Drinking Sicilian Wine: Sicily has a rich culinary heritage and is home to many classic Italian dishes familiar in the US including Involtini de Pesce Spada (Swordfish Rolls), eggplant dishes like Pasta alla Norma, cannoli, ziti with tomatoes and tuna. Click here for recipes for these traditional Sicilian dishes, and many more.

Enjoy, and remember: WBW #42 asks you to drink an Italian red and describe it in 7 words or less. Why not make it Sicilian?

Email ThisBlogThis!Share to TwitterShare to FacebookShare to Pinterest
Labels: Sicily

Believe it or not, I have never seen the God Father or read the book. I just started reading the book last week, just in time to enjoy your February Italian wine region! I can't wait to read your wine reviews.

Have you already tried cooking a Sicilian dish? (Not to get ahead of your posts, but I'm curious!)

Good synergy, Orion Slayer. I've not made a traditional Sicilian dish yet. My cookbooks arrive from Amazon.com soon. Fingers crossed. It may turn out that I make a Sicilian dessert to go with that dessert wine--the one in Vino Italiano looks insanely good, though far from low-cal.