Umbrian Merlot--Even Miles Would Approve of This 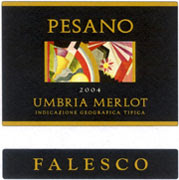 Merlot has really been kicked around the block since Sideways. In spite of the fact that Miles downs a considerable amount of Merlot in a fast food restaurant at the end of the film, large numbers of people now refuse to drink Merlot on general principle.

This is good news for you and me. Because Merlot can be fabulous. Not everybody makes their Merlot grapes into blackberry jam. Some actually make it into wine. And because of the dip in demand, there is some great Merlot out there in the market that is priced to sell.

I just had an Umbrian example of Merlot, and it was fantastic--and it in no way resembled a simple, over-oaked fruit bomb or a breakfast spread. Instead, the 2004 Falesco Pesano Merlot was an excellent QPR steal for just under $12. I purchased the bottle back before this blog was born in early July 2006 for $11.99 at Costco. A quick search on Vinquire revealed that if you want a bottle of the stuff now, you can expect to pay $25.99 at the one retailer who sells it online. More recent vintages can be had for between $11.99 and $16.99 in case you want to try your luck.

What did I experience when I pulled the cork? The first thing I smelled was fresh-ground coffee. Yes, not a breakfast spread, but a breakfast drink. This was followed by another breakfast smell: bacon fat. The combination was enticing and mouth-watering. In the flavors, I tasted cherry, blackberry, and more coffee bean. There was a smoky aftertaste that was quite distinctive. This was a lot of wine for $12 and I think that it probably benefited from the 2+ years that it received in my various storage spaces. We had it with meatloaf and potatoes, which was a perfect pairing for the meaty and smoky flavors in the wine, but you could just as easily pair this with a roast or stew. Yes, you could have it with an In 'n Out Burger if you must be like Miles.

One of the wine mags gave this an 89, which in my opinion is just plain silliness. This wine was distinctive, widely available when it was released, and worth every penny that it cost and then some. If the more recent versions of this wine are anywhere near this good (and CellarTracker reviews of the 2005 vintage suggest it is) then you should grab this if you see it. You're in for a real treat.
Posted by Dr. Debs at 5:30 AM

The 89 Project is calling you.

While you were commenting, I was posting over there! Great minds?

Sounds really good--we have to try it!

This really sounds good!Looking forward to try it out!
Thx for posting keep up the good work!!

Is this a new(ish) Falesco offering? Never seen it. Loved all of their offerings, and was especially "wow-ed" by the high-end Marciliano and Montiano.