An Unexpected Red from the Veneto 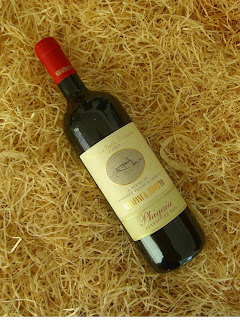 I'm still learning about Italian wine, but when I think red wine from the Veneto I think Valpolicella or Amarone. Made primarily with local grapes Corvina Veronese and Rondinelli, these can be zesty and fresh or full-bodied and silky.

When I looked through my cellars for a Venetian red, however, I came across a bottle that seemed more like a Bordeaux. It was made from Cabernet Franc and Merlot. Cab Franc and Merlot?

Turns out Cabernet Franc is popular in the Veneto--and in nearby Friuli-Venezia Giulia, too. And Merlot, which was probably introduced into Italy at the end of the 19th century, is the 3rd most heavily-planted grape in all of Italy.

After drinking this bottle, I can see why.

The 2002 Serafini & Vidotto Phigaia "After the Red" was hands down an excellent QPR bottle of wine that cost less than $10. ($9.99, Garagiste; the 2004 is available elsewhere for around $20) Expressive aromas of greens, leaves, and a bit of red fruit were accompanied at first by a whiff of something that reminded me a bit of melamine. Happily, that blew off very quickly. The flavors were the real treat, with subtle layers of cranberry, then plum, followed by herbs, some leather, and a bit of tobacco. This complex wine was not the least bit intimidating, given its price tag and its gently unfolding flavors. It was a wine that rewarded active attention as it developed, but didn't demand you stop everything and take notice.

We paired the wine with a take-out pizza loaded with sausage and green peppers and the wine was the perfect backdrop to the herbal, green pepper, and fennel flavors of the pie.

This bottle was just the latest reminder of something I've felt with increasing conviction over the past 15 months as I've been drinking my way through the Italian peninsula: there are treasures to be had here--and some of them are quite inexpensive. Tuscan and Piedmont wines are great. I love them. But there's so much more to Italian wine, such as this unexpected Bordeaux blend from the Veneto.
Posted by Dr. Debs at 5:30 AM

Nice write up. Just what I need after a hard days work..now to find this bottle :)
Saw this on you Tweet.

I picked up a bottle of 2005 Blason Cabernet Franc from Friuli-Venezia Giulia at K&L a while back. They really liked it but it didn't translate for me. Been looking for another one to try so I will certainly keep my eyes out for this one...

French varieties were introduced in north eastern Italy as far back as the Napoleonic age. Napoleonic troops did not only bring the (much welcome) Napoleonic code (i.e. modern laws) but also French varietals.

You're right, there's so much more to Italian red wines!
My all time favourite is Montepulciano d'Abruzzo, opened & allowed to breath for an hour or so, then enjoyed with a basic Tomato and pancetta pasta, somehow the tomatoes & wine get married & take you off to Tuscany for the honeymoon!

Cab Franc can be an acquired taste--so keep trying it to find one you like. I, too, like Montepulciano d'Abruzzo (and indeed all wines I've had from the Abruzzo). Check back next month for Piedmont.